Tonight (25th November) the Nursing and Midwifery Council (NMC) is holding an event to commemorate 100 years of Nursing Registration. To mark this landmark occasion, Alison O’ Donnell, a QNIS Fellow and a member of the QNIS History Committee, has prepared a look back on 100 years of nursing registration in the UK. 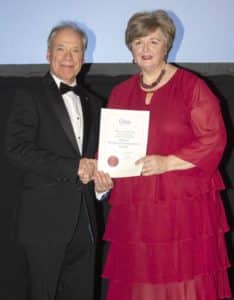 A century of nurse registration

Given that this is the centenary year of nurse registration in 2019, it is timely that this key legislation is considered.  The Nurses Registration Act of 1919 was not without controversy nor its critics.  The Act(s) were passed in December 1919, but the passing of this pivotal law for nursing had not been an easy journey. [unlike the midwifery state registration which had been required since 1902, (McGann et al 2009)].

Who was a nurse?

In the latter part of the 1870s, anyone could call themselves a “nurse” and advertise their skills in local newspapers or be recommended by a doctor whom they worked for, particularly in a domestic setting.

The early work of William Rathbone in Liverpool supported the idea of home nursing which was relieving sickness in the home with the poor, but also this being ‘morally uplifting’ (Baly 1987).  By 1877 there was a working model for the QVJNI based upon Nightingale lines which had nurses working in districts in city areas.  The nurse had to be supervised by a Lady Superintendent. As cities became more overcrowded in the latter part of the nineteenth century district nursing became more established. The Queen Victoria’s Jubilee Institute for Nurses [QVJIN], employed only well-trained nurses for home domestic visits amongst the poor. The QVJNI kept and maintained its own register of nurses who were fit to be employed by them locally.

In Edinburgh, a Scottish Committee was established in 1890 with Miss Peter as its superintendent. Miss Guthrie Wright was the first sectary of the Scottish Council and thereafter offices were established in Glasgow and Dundee.  By 1891, Baly (1987 p38) notes that ‘demand outstripped the supply’  – the QNVJI was the forerunner to the Queen’s Nursing Institute and the Queen’s Nursing Institute of Scotland.

The fight for the state registration of nurses emerged following the establishment of the Nightingale Training School in 1860 where ‘the concept of a State Register’ began to be suggested (Bendall and Raybould 1969 p1).   By 1886 doctors and teachers were subject to registration, thus, to be in parallel to these professions the Hospitals’ Association, led by Henry Burdett, set up a meeting to establish a register of nurses.  They attempted to state that no nurse should be registered who had not competed less than 3 years training (Hart 1996).  Henry Burdett disagreed with many of the prominent Matrons of the time.  In November 1887, the then Matrons’ Committee resigned in protest at Burdett’s approach forming their own group under Mrs E G Fenwick, the British Nurses Association.

The registration campaign was led by some notable key players. Ethel Gordon Fenwick (neé Manson) trained as a lady pupil at Nottingham Children’s Hospital and then Manchester Royal Infirmary. She became a ward sister at The London Hospital and in 1881 was appointed Matron of St Bartholomew’s Hospital.  To the side of this camp was Florence Nightingale, who was opposed to State Registration in any format and who believed that nursing was a “calling”, which ought to focus on practical nursing skills and intrinsic personal qualities (Abel-Smith 1960, Helmstadter 2007).

By 1902, the registrationists campaign was strengthened by the 1902 Midwives Act, and from this Mrs Fenwick established The Society for the State Registration of Trained Nurses (SSRTN).  In 1903 and 1904, two unsuccessful Bills were presented in Parliament, but by 1904 a Select Committee on the Registration of Nurses was established. From 1904–1905 the committee heard from several contrasting viewpoints and took many witness testimonies (Hart 1996).

Eva Lückes, a disciple of Florence Nightingale, was Matron at The London Hospital was one of the key influential Matrons who opposed state registration (Collins and Parker 2003).

The committee reported to the House of Commons with 26 recommendations in July 1905, the main one being the establishment of a register of nurses to be maintained by a central body appointed by the State; a nurse should be ‘Registered’, and their name held on a register. The select committee on registration also recommended a separate register for asylum nurses. The registered nurse was to be charged a fee for their name to be held on this Register. In the years before the First World War various Bills were presented to parliament, but none progressed through both the houses of parliament successfully and by 1914 other world events overtook the registrationists’ campaign.

The College of Nursing and the Acts

The College of Nursing, later the Royal College of Nursing, was formed in 1916 and was a key organisation which influenced the development of the Nurses Registration Bill of 1919 (CoN RCN 4, 1919).  The college through their Founders, worked to support the legislation and after the end of First World War, they and others like Fenwick, managed to get the debate on registration to be introduced to The House of Commons on March 28th, 1919 (CoN RCN 4/1/1box 2).  As well as this, the college also sought support from ‘their lordships’ and this was supported by Arthur Stanley and Edwin Cooper Perry in the House of Lords (CoN RCN 4/1/box 2).

The act finally reached its last debate and by the end of 1919, there were adaptations to the Act for Ireland, Scotland and England (and Wales included); on the 9th December 1919, the Act for Scotland was an amendment to the Bill, read for third time and passed; 22nd December 1919, the Act for Ireland was an amendment to the Bill and then was agreed finally on the 22nd  December 1919.   The House of Commons sat on the 22nd December 1919, where the last amendments were ratified and been sent to be printed at the registry, having the 23rd December 1919 as a finalised print date and thus the Nurses Registration Act(s) were passed into law (HMSO 1919); this enshrined in law the establishment of three separate General Nursing Councils [GNC] for England and Wales, Scotland and Ireland and amongst each of the GNC’s duty was the responsibility to compile a register of qualified nurses.

Copies of the Bills for England, Scotland and Ireland are held in the Royal College of Nursing Archives, Edinburgh (CoN RCN 4/1/ box 2) and now form a new exhibition, see below. The three separate Nurse Registration Acts were passed and thus each country then formed its own General Nursing Council [GNC] which had duties to; complete a syllabus of instruction, and subject examinations and establish a register of qualified nurses (Baly 1995). Each register was to be formed in 5 parts; a general part, a male part which was supplementary, a part for nurses trained in mental diseases; a sick children’s part and any other prescribed part (Bendall and Raybould 1969).

It could be suggested that the Act of 1919 and its subsequent legislation down through the century has not fully succeeded in affording professional independence for nursing in a wider setting, nor has it solved many of the intrinsic underlying tensions such as the status of nursing as a chosen profession for men and women, some gender stereotyping still exists in relation to nursing as a career, and the pay and conditions of working in the contemporary health setting is still challenging.

The idea of having nurses who were ‘registered’ and thus accountable to a nominated person in an area stemmed from the establishment of the early efforts of the QNVJI – these aims informed the early campaigns in the fight for nurse registration.

The current exhibition Wake Up Slackers! The great nursing registration controversy was launched on the 17th October 2019 at RCN HQ, London – this exhibition will come to RCN Scotland from May 2020 and there will be a number of public events to support it; for more information click here.

ABEL-SMITH, B., 1960. A History of the Nursing Profession. London: Heinemann.

HMSO, 1919.  Nurse Registration: A Bill to provide for the State Registration of Nurses. London: His Majesty’s Stationery Office.