Pauline Waugh received funding through QNIS several years ago, which led to the creation of the Cheyne Gang. Singing for breathing has shown improvements for those with long-term respiratory conditions, yet there was no mention of it in the recent Scottish Government’s Respiratory Care Action Plan. Here, Pauline offers a potted history of the Cheyne Gang, and a call for action to respond to the Scottish Government about why singing for breathing should be taken more seriously. 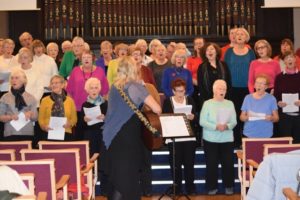 I am a practice nurse in an Edinburgh city centre surgery and together with my practice nurse colleagues Anne Ritchie (now retired) and Sarah Marshall, we founded The Cheyne Gang© singing for breathing groups in 2013. The Cheyne Gang is a high impact arts and health initiative which encourages people with long term respiratory conditions to engage in artistic and creative activity through music and song to help meet the challenges of their disease physically, mentally and socially.

The name of the group was suggested by one of our members, Lenny Love, at our second meeting. Our meeting place was in Cheyne Street in Edinburgh and Lenny recognised that he and his fellow singers were linked by the same debilitating condition and came up with this clever play on words. We have since discovered that Cheyne Street is named after Dr John Cheyne, a Leith born physician who was famous for, amongst other things, his paper on the pathology of the larynx and the bronchi.

Our initial year-long project was funded by a grant from QNIS and we were able to replicate the research results that had been obtained by the Sydney de Haan Research Centre, based in Canterbury, in their investigation into the health benefits of singing for those with long term respiratory disease particularly COPD (Clift et al, 2013).

We saw improvements in breathing control, a reduction in the need for bronchodilator medications, improved sleep and reduced anxiety. Although this was only from a small group of 8 patients, we were confident that we could roll this out across Edinburgh and offer more people living with respiratory disease the chance to sing in a community group, learn natural breathing techniques and socialise with those who were experiencing the same symptoms and problems, thereby offering support to each other. We now know that the service we offer tackles social isolation and leads to real and lasting friendships.

As part of our QNIS funded research, we carried out qualitative interviews and we were moved by the feedback we received – here are some of the comments: –

Since 2013 we have become a Scottish Charity, developed a ‘singing for breathing’ training programme to create more specialist singing leaders to facilitate our groups, started seven more groups in Edinburgh, Glasgow and the Scottish Borders (which is one of this year’s Catalysts for Change projects). We are also supporting three other singing for breathing groups including one in Forfar which has 50 members. This one unfortunately lost its financial support from the British Lung Foundation after they pulled all their funding for singing for breathing across the UK, resulting in the closure of some groups.

When we started out, we never dreamed that our members would take to performing for the public. How wrong we were! Under the direction of our fantastic voice coaches, they have performed at the Scottish Parliament at the launch of the Chest Heart and Stroke Scotland paper “No Life Half Lived”, which highlighted the need for rehabilitation services for their client group. To witness the Cheyne Gang leading the assembled audience in a rendition of “If You Can Talk, You Can Sing” was to witness rehabilitation in action! We have over 120 members and we feel strongly that this intervention should be offered on the NHS. Singing for breathing sits well with pulmonary rehabilitation (PR) as either a follow on or as a standalone alternative, particularly in areas when PR is not available. There is evidence that PR has a high dropout rate while singing for breathing groups retain members.

In addition to the Scottish Parliament gig, as it is now referred to by some of our members, The Cheyne Gang have twice performed with a full orchestra, at medical and nursing conferences across Scotland and at a special event at the Edinburgh International Book Festival. All of this work is all done in our own time and we are very proud of what we have achieved. Our groups all have nurses, active and retired, attached to them and our members have expressed their gratitude for this as they feel safer and supported.

When we started this project, all we did was sing with our members, along with a few traditional breathing exercises used by singing teachers.  Now we sing using recoil breathing, which encourages core breathing, extending the out breath and aerobic movement. An essential element of each session is fun.

In the past six months, we have been offering taster training sessions to musicians and health care professionals facilitated by one of our singing group leaders and Anne or myself. These sessions, plus the conferences we have spoken at, have helped us identify areas of the country where there is interest and support for the creation of a Cheyne Gang. We hope to raise funds to start groups in Fife and the Highlands this year and we hope to secure funding from Creative Scotland to redevelop and run our ‘singing for breathing’ training so that we can provide the specialist singing leaders to facilitate these new groups.

The Arts and Health are inextricably linked with a wealth of positive evidence for not just singing for health but dance for Parkinson’s Disease, Tai Chi and yoga for anxiety management, talking therapies, live music in intensive care units, laughter therapy, music reminiscence for dementia and many more. In primary care supported self-management and social prescribing are encouraged and patients can be referred to exercise classes, arts groups and singing groups. The Chief Medical Officer (CMO) Catherine Calderwood, in a recent article in The Scotsman, cited the Cheyne Gang as the “magic of the arts” benefiting social, mental and physical wellbeing.

Imagine my dismay on reading the recent draft Respiratory Care Action Plan, the purpose of which is to highlight the Scottish Government’s vision for driving improvement in the diagnosis, care, treatment and support of people living with respiratory conditions in Scotland, that there was barely a mention of the Arts and Health and their positive impact on the health of sufferers of respiratory disease and certainly no mention of ‘singing for breathing’. There were opportunities under 3 of the commitments 4, 5 and 8 where PR is mentioned, as is mental health and supported self-management. Our singing interventions tick all these boxes. The Cheyne Gang are currently involved with The University of Edinburgh, in partnership with a research company called Pharmatics, in the development of an Artificial Intelligence (AI) supported self-management app.  An All-Party Parliamentary Group on Arts, Health and Wellbeing Inquiry Report in 2017 concluded that arts can make an invaluable contribution to a healthy and health-creating society and that ‘Policy should work towards creative activity being part of all our lives’. We are involved in several pieces of research which we hope will provide us with the evidence we need to persuade the NHS that our low-cost innovative intervention is worth funding and we are not just a ‘daft wee bunch of nurses singing with their patients’.