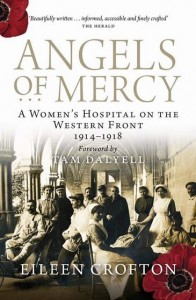 The author, Dr Eileen Crofton, had a long and distinguished career as a doctor and medical researcher, notably helping to found Action on Smoking and Health, under the auspices of the Royal College of Physicians. In her retirement, she wrote this book, published in 1997 and originally titled “The Women of Royaumont: A Scottish women’s hospital on the western front”. This well-researched book was edited and reissued as a 2nd edition in 2012 by Eileen Crofton’s son, Ian. It tells the story of a Scottish Women’s Hospital of the First World War. The Hospital was the inspiration of Dr Elsie Inglis, a distinguished Edinburgh doctor and honorary secretary of the Scottish Federation of Women’s Suffrage Societies. She was keen to demonstrate that woman could contribute to the war effort, particularly in the field of medicine.

Eileen Crofton’s book tells the story of the hospital that went to France to the beautiful Abbey of Royaumont, near the western front, which operated continuously from January 1915 to March 1919 under the direction of another remarkable woman, Frances Ivens, chief medical officer.

This book is incredibly well-written containing details of the day to day operations of the hospital. It is particularly interesting in its description of the lives of and relationships between the women who staffed the hospital at all levels including surgeons, anaesthetists, nurses, orderlies, kitchen staff and the chauffeurs, who collected patients from the train stations and brought them to Royaumont. It also provides insights into the lives of some of the patients who were treated at Royaumont. I perhaps would have enjoyed the book even more had there been a little more context. For example, I would have appreciated timeline links to the well know battles and other key events that occurred during that period.  Perhaps however, this feeling of being isolated from the other events of the First World War reflects the sense of isolation felt within Royaumont as they continued to operate throughout the war without much support except that provided by Scottish Federation.