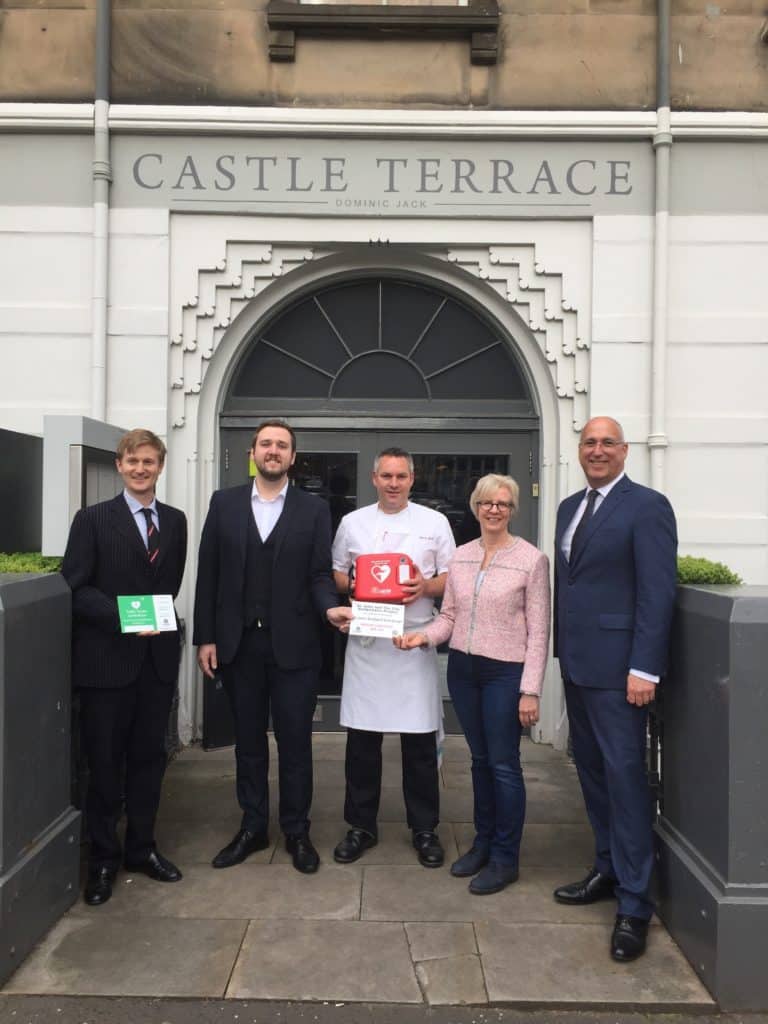 A life-saving defibrillator has been unveiled outside the award-winning Castle Terrace restaurant.

The installation of the device came about when the restaurant’s neighbours – the Queen’s Nursing Institute Scotland (QNIS) – identified a gap in provision in the area.

The defibrillator has been installed on the wall in the basement area of the restaurant, and is able to be used 24/7 in an emergency.

The device works by giving an electric shock to restart the heart of a person who is in cardiac arrest.

With around 70 people having a cardiac arrest each week in Scotland, and around 350 happening each year in the area within Edinburgh’s bypass, it’s something that can affect people of all ages, at any time.

Starting CPR, and using a defibrillator within the first few minutes of survival, can increase the chances of survival to as high as 75%.

The project was instigated by QNIS’ chair of Trustees, Professor Sir Lewis Ritchie, a very experienced GP, whose research has focused on cardiac care and who has led work for the Scottish Government on urgent and out-of-hours services.

The charity approached St John Scotland and the process began under the St John and the City programme, which last month celebrated installing more than 120 defibrillators across Edinburgh.

Clare Cable, QNIS Chief Executive and Nurse Director, said: “We are very pleased to have been involved in bringing a defibrillator to this part of Edinburgh and to play a role in helping to make the city a community of potential first-responders.

“QNIS has been based at Castle Terrace for almost 130 years. It seems fitting that our charity which promotes excellence in community nursing to improve the health and wellbeing of the people of Scotland has established a link with St John Scotland who run projects across the country to help save and enhance lives every day.”

The defibrillator, which is hosted by the restaurant, was unveiled earlier this month, with QNIS being the guardians of the device.

Lynn Cleal, a St John Scotland volunteer who leads the St John and the City project on behalf of the charity, said: “In such a busy part of Edinburgh, it’s so important to have defibrillators available to the community should one ever be needed in an emergency.

“We’re delighted to work with the Queen’s Nursing Institute Scotland and Castle Terrace restaurant to provide this life-saving bit of kit for the benefit of everyone who lives near, works in or visits the area.

“The 120-plus defibrillators installed under the St John and the City project have been used at least 18 times already, so although of course we hope no one is unfortunate enough to need one, we’re delighted that they can – and have – saved lives.”