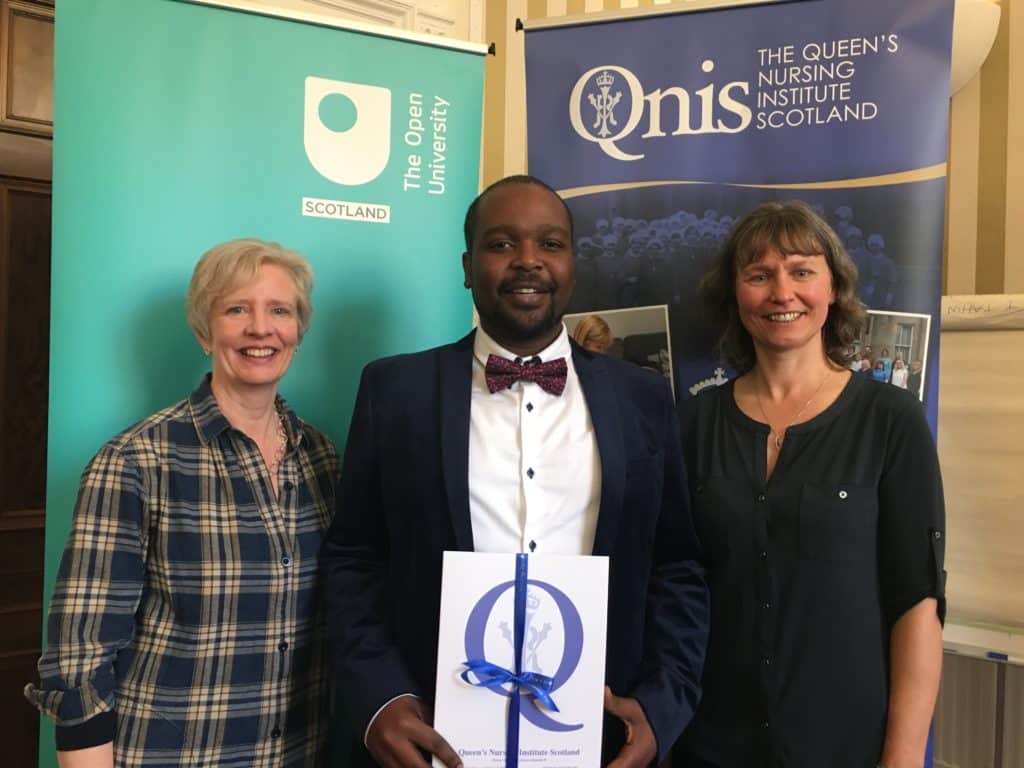 An Ayrshire nurse has been recognised for his outstanding contribution to community nursing.

Kombe began working at the Dr McMaster and Partners GP practice in Girvan as a receptionist in 2006 and qualified as a nurse, having gained his degree with the OU, last year. Kombe, who lives locally in Girvan and is a father of three, fitted his study around work and looking after his family.

He was nominated for the award by Liz Sturley, professional lead for nursing at the OU in Scotland.

Liz explained: “Kombe is a terrific example of what it means to be both a nurse and an OU graduate. He is so committed to his patients, to supporting his colleagues and to learning from them, and to helping spread the message about how important the role of community nurse is in our society. He has worked his way up thanks to his incredible enthusiasm and his dedication to the people that depend on him. He is such a fitting recipient of this prize.”

Clare Cable, Chief Executive and Nurse Director at QNIS, added: “We are delighted to be awarding a QNIS academic prize with the OU for the first time this year. Kombe’s journey to becoming a registered nurse is already inspiring others. We wish him all the best as he continues his nursing career caring for the people of Ayrshire.”

On receiving his prize, Kombe commented: “This is an extremely proud moment for me. As I have a young family, studying through The Open University allowed me to pursue a career that I could not otherwise have undertaken. The OU offered the flexibility of continuing in employment while learning, allowing career progression from an administrative role to Registered Nurse.

“My employers have been a tremendous support. I love the interaction with patients and their families, allowing me to build a rapport so I can provide them with the best possible care. I help patients to feel at ease and we discuss their worries and anxieties about their health, which means I can give them the right care, improving not only their health but empowering them to manage their own health in the community. I want to build on my training and become the best nurse I can be.”

Dr Bruce McMaster said: “It has been a pleasure to be part of Kombe’s journey from Practice Receptionist through to his gaining a BSc Honours degree in Adult Nursing. From the beginning it was clear that Kombe had the attributes and ambition to develop his role, and we were delighted to play a part in his training through The Open University.

“We were elated to hear he was receiving an award from the Queen’s Nursing Institute Scotland, which is a fantastic achievement and reflects his hard work and commitment to nursing. Kombe has embraced every challenge and is a valued member of our team, well-regarded by colleagues and patients. This award is a testament to his outstanding qualities.”

Each year QNIS asks Scottish universities providing nursing education to nominate outstanding students who promote excellence in community nursing for Academic Prizes. This is the first time an award has been offered in conjunction with the OU.

The OU’s nursing programme operates across Scotland in partnership with NHS boards and other employers and is designed to enable existing NHS and care staff to progress from support roles into the nursing profession while learning on the job, enabling communities to grow their own nursing workforce.