This Project piloted a mindfulness based cognitive therapy (MBCT) programme to carers of people with dementia in Oban, and assessed the effectiveness of that programme upon their caring role.

Mindfulness, and MBCT, is about becoming more aware of thoughts and their connection with behaviour and quality of life. It has become a recognised technique for the treatment of depressive illnesses, and this programme sought to explore whether or not it would be a valuable support mechanism for carers of people with dementia.

Eight participants took part in the six-month project, and all lived with, and cared for, their relative or partner. The project itself consisted of eight weekly sessions, with follow up fortnightly and monthly maintenance sessions for the remainder of the project. At the end of the six months, participants were interviewed to assess how mindfulness had influenced their health and wellbeing.

The carers felt that by including mindfulness in their daily routine, they have been able to value themselves more, benefitting both their own wellbeing, and that of the person they care for.

The Mindfulness team are currently working with the local authority to make links to Mindfulness within the Carer’s Strategy.

This project recently won the Mental Health Forum Award for Excellence in Research/Evidence into Practice, one of six winners from over 40 submissions.

“I am delighted and honoured to receive the award on behalf of the project team. This recognition for the work and dedication of the team on a project is welcomed. The Being Mindful of the Carers project was an innovative project delivered by Ylva Champion, Specialist OT, Community Dementia Team in Oban. The commitment of the whole team ensured the success of the project along with support from our funders, QNIS and The Burdett Trust. However, it would not have been possible without the participants and their commitment to come along each week which made the project achievable. To them we owe a huge thank you! We hope that the findings of this research will be of benefit not only to the participants but the wider community also.”

The project team put together a poster summarising the project, which can be downloaded here. 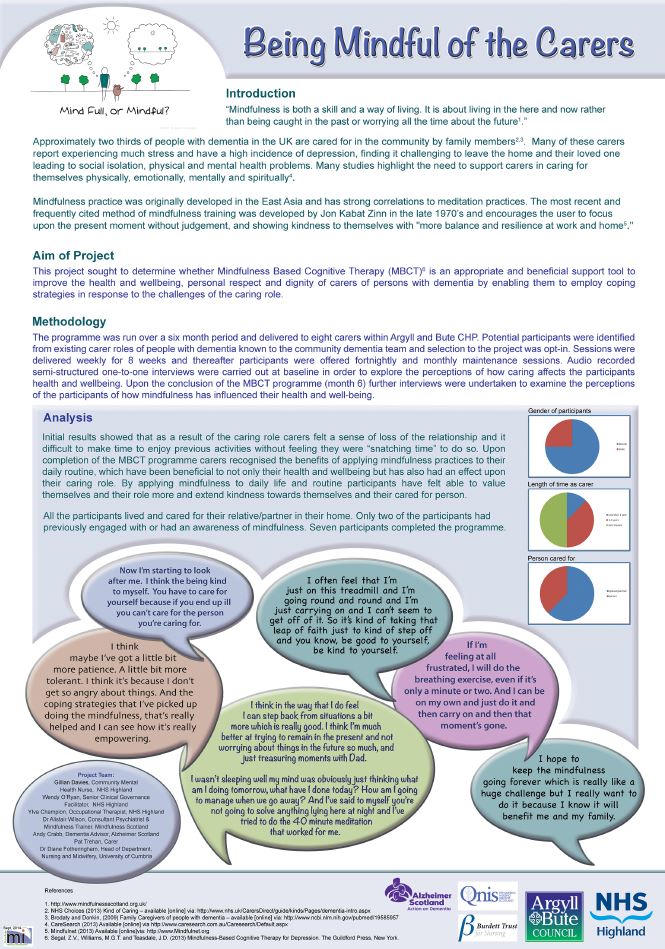