Helen Condie, currently residing in Leys Park Nursing Home, turned 100 today. Helen was a nurse of many talents and prior to retirement, was a Health Visitor in the Dalgety Bay area. Before health visiting Helen was the Practice Nurse in Charlestown and earlier ran the clinic at the Paper Mill in Inverkeithing.

In the QNIS archive, we have a copy of one of Helen’s early record cards where her Superintendent noted her desire to become a Queen’s Nurse and her connection with those in her care:

“Helen shows interest in the social side [of nursing] and appears to appreciate her responsibilities. She is anxious to become a successful Queen’s Nurse. She receives a ready welcome in the homes.” 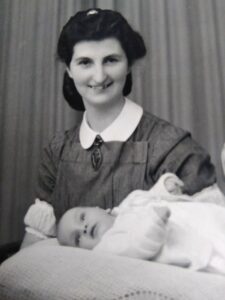 Born in Newarthill but brought up in Lochore and Dunfermline, she worked initially in a Dunfermline flower shop. As a teenager, she was a staunch member of the Christian Brethren, which meant that in WW2 she chose to be a Conscientious Objector. During this time, she was drafted into a role in a Perthshire Convalescence Home looking after injured Polish airmen. From that she went on to train at the West Fife hospital in Reid Street, going on to become a qualified midwife and Queens Nurse.

During her early retirement, Helen studied German language and Music Theory alongside the young pupils at Inverkeithing High School. Lack of mobility meant that in later life she switched from Brethren to Dalgety, Church of Scotland.

Although there have been several boyfriends in Helen’s life, none have met the strict standards of her faith and she remains a single lady to this day, strong in spirit though living with Dementia.

Thank you to Helen’s friend David Tennant for sharing her story with us.

Looking for more information on the history of Queen’s Nursing?
Our Voices of Experience videos provide an informative and colourful depiction of life as a community nurse across the latter half of the twentieth century. Nine retired Queen’s Nurses were interviewed by journalist Pennie Taylor, each interviewee bringing a unique perspective to create a comprehensive look at the importance of Queen’s Nurses to Scotland’s communities. Read more here.