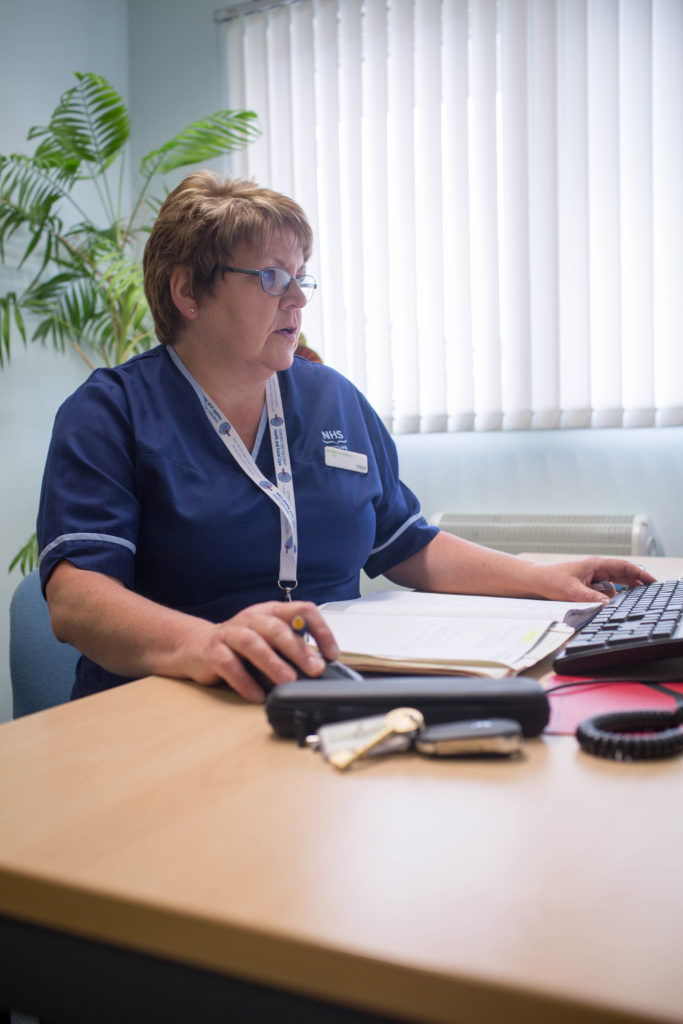 When she took up her post as Senior Charge Nurse for community nursing in Annandale and Eskdale, top of Hazel Hamilton’s to-do list was reorganising the service from a single-practice focus to larger area-based teams.

Annandale and Eskdale is a large rural patch in South West Scotland with scattered farms, quiet villages and small market towns which are home to more than 38,000 people – most of them elderly. The community nurses provide care for those who cannot make it into a surgery. “If we didn’t go to them, they would be in hospital or long-term care pretty quickly,” says Hazel.

The bulk of the caseload is wound management: post-operative care and leg ulcers, mainly. There is a lot of palliative and end-of-life care, blood samples to be taken, intravenous lines and pleural drains to be managed. “We are doing much more complex work now in people’s homes,” says Gretna-based District Nurse Mary Sherry. “But we are also taking care of the whole person while we are at it, looking out for our patients and their carers to make sure all their needs are met.”

It is that personal touch 70-year-old Linda appreciates most. Housebound for the past eight years in her neat bungalow, she looks forward to the community nurses’ twice-weekly visits to replace the dressings on her swollen legs. “They’re a grand lot of lasses,” she says. “You get used to them and open up to them. They see to my ailments, and we put the world to rights.” 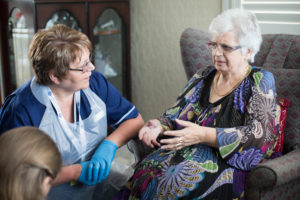 Linda, who has lymphoedema, Type 2 diabetes and a hernia, says she is terrified of going into hospital. “I want to do whatever I can to stay out,” she says. “The nurses help to motivate me. I have lost four stones in weight so far. Next, I want to be able to get out and go shopping.”

The community nursing teams – who between them make around 200 home visits a day – are organised across three geographical hubs. Still GP-attached, the nurses can rotate between teams and keep in close touch to familiarise themselves with each other’s caseloads. At weekends, they provide area-wide cover.

There are 30 nurses in total, supported by seven health care assistants who have been trained up to do basic duties such as personal care, venepuncture and simple dressings, and two nurse technicians who keeps track of referrals and knows where everyone is.

Patients have direct numbers to make contact with nurses between appointments if necessary, and home visits are arranged according to their wishes, needs and case complexity. “It’s about being truly person-centred,” says Hazel. “For instance, diabetic patients who need insulin are normally the first people we visit in the morning. We prioritise according to need.”

Mary, one of the service’s three Charge Nurses, describes her manager as “very focused, someone who believes in what she’s doing”. And she credits Hazel’s inclusive management style for making the change process as smooth as it can be. “She works hard to get everyone on board and involve them,” she says. “”Hazel is a role-model, and a great believer in open communication.”

The same qualities earned Hazel a place on the new Queen’s Nursing Institute Scotland (QNIS) community nursing development programme.“It has been such a refreshing and exhilarating experience for me,” she says. “If someone had told me that I would be standing in a circle around a mandala with a group of people I had never met before, feeling the energy, I’d never have believed it. But the Queen’s Nursing teaching has had a big impact on me.” 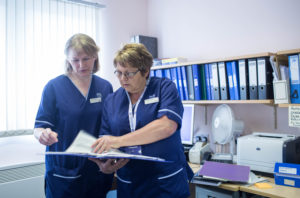 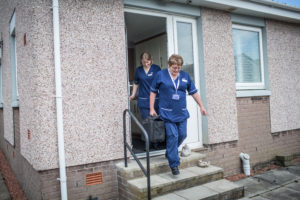 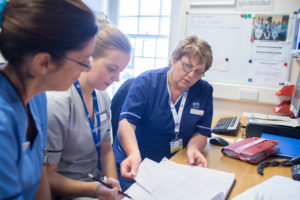 One of the innovations she has introduced is daily handovers between teams. Linking by videoconferencing, the nurses now discuss cases and share their knowledge. They liaise with the wider multi-disciplinary team when necessary, and keep up-to-date with local voluntary organisations so that they can signpost patients and carers towards other sources of help. “It’s only by working together that we can make sure folk get all the support they need, when they need it,” says Hazel. 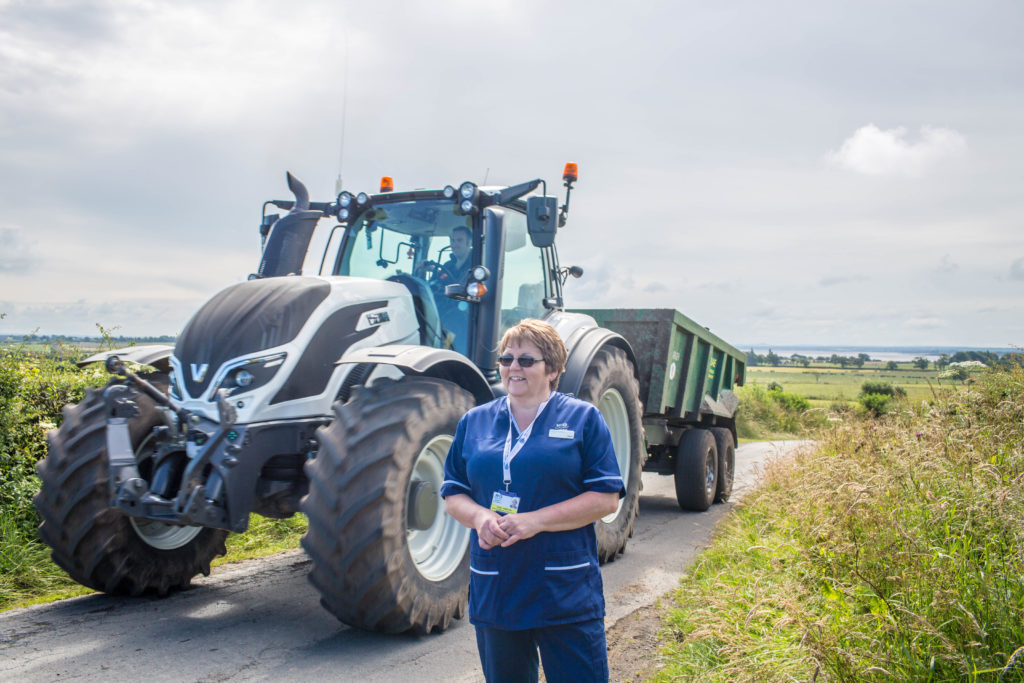 After qualifying as a nurse in 1981, Hazel worked in acute medical and coronary care in Dumfries hospital before leaving to have her first child. Married to a dairy farmer, she went back to nursing a couple of years later to work in care homes.

These days, the bulk of Hazel’s work is focused on balancing the leadership needs of the team and administrative commitments. But she relishes opportunities to get out of the office, and back onto the caring frontline. She enjoys getting hands-on with patients whenever possible, and makes a point of regularly shadowing team members as they perform their clinical duties.

When posts on the team are advertised the community’s nurses’ new role attracts interest, and so far word-of-mouth has been the most effective recruitment tool. “We’ve had a few nurses join us from acute environments on the other side of the border,” says Hazel. “They have brought new skills with them, like intravenous antibiotic administration, that will be really useful to us.”

In an effort to inspire the community nurses of the future, Hazel has organised for third year nursing students from the University of the West of Scotland to work one day a week in a local care home while on their placement.

The first cohort of students developed a project on catheter care, sharing best clinical practice with home care staff, that has resulted in fewer call-outs. The second cohort has just completed a basic guide to skin care for care home workers.

In the Annan community nursing hub, part of the town’s health centre, student nurse Lynne Paul reflects on her community experience. “I didn’t think it would be nearly as busy as it is,” she says. “When I go back into the hospital I’ll have a far better understanding of where I am discharging patients to, and just how much they can do here.” 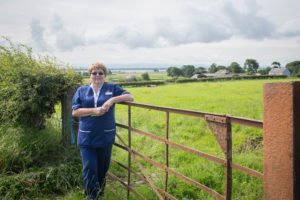 Hazel sees change as an ongoing process, and actively involves her teams. “It is essential to listen to the staff on the ground, and work collaboratively to influence service development,” she says. “If someone comes up with an idea for improving things, we try it. I tell the team to ‘go with your gut feelings, have courage’. This is a new era for community nursing. The future’s looking good.”