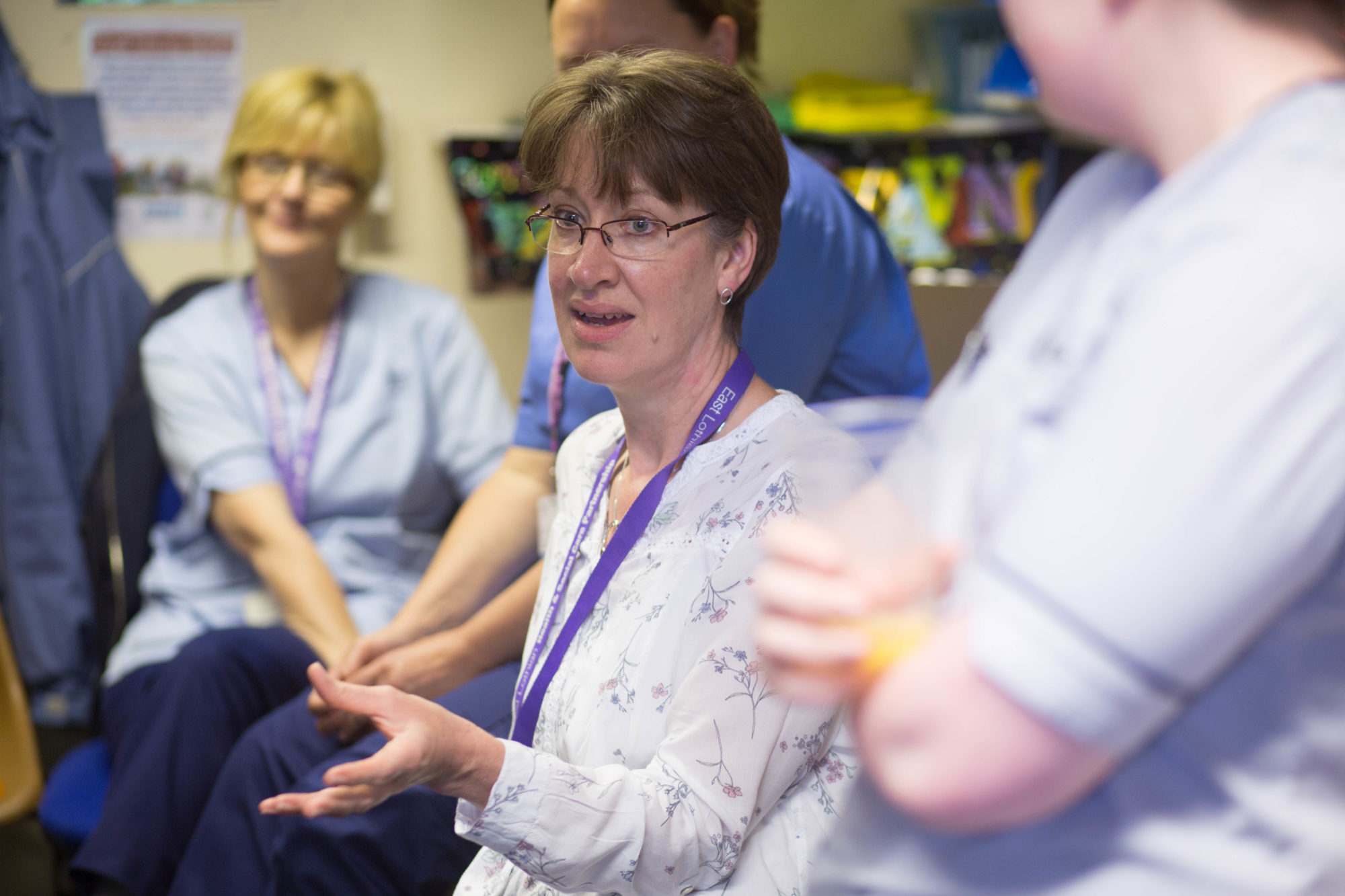 Julie Churchill is at North Berwick Group Practice, visiting one of the community nursing teams that she works with. It’s the first time they have been together since it was announced that she is now their permanent Team Manager.

For the previous year Julie had been acting team manager, and is therefore familiar with a role that involves overseeing 76 community nurses. They work in six day-time teams and one evening team across East Lothian; there are the local Macmillan nurses, and nurses based in four treatment rooms across three GP practices.

It was Julie’s passion for community nursing, that won her a place on the Queen’s Nurses programme.

“There are more people living with debilitating long-term conditions, and we know there is a great deal more that they can do to keep themselves well and reduce the exacerbations that might take them into hospital,” says Julie. “But that means creating a very different culture.” 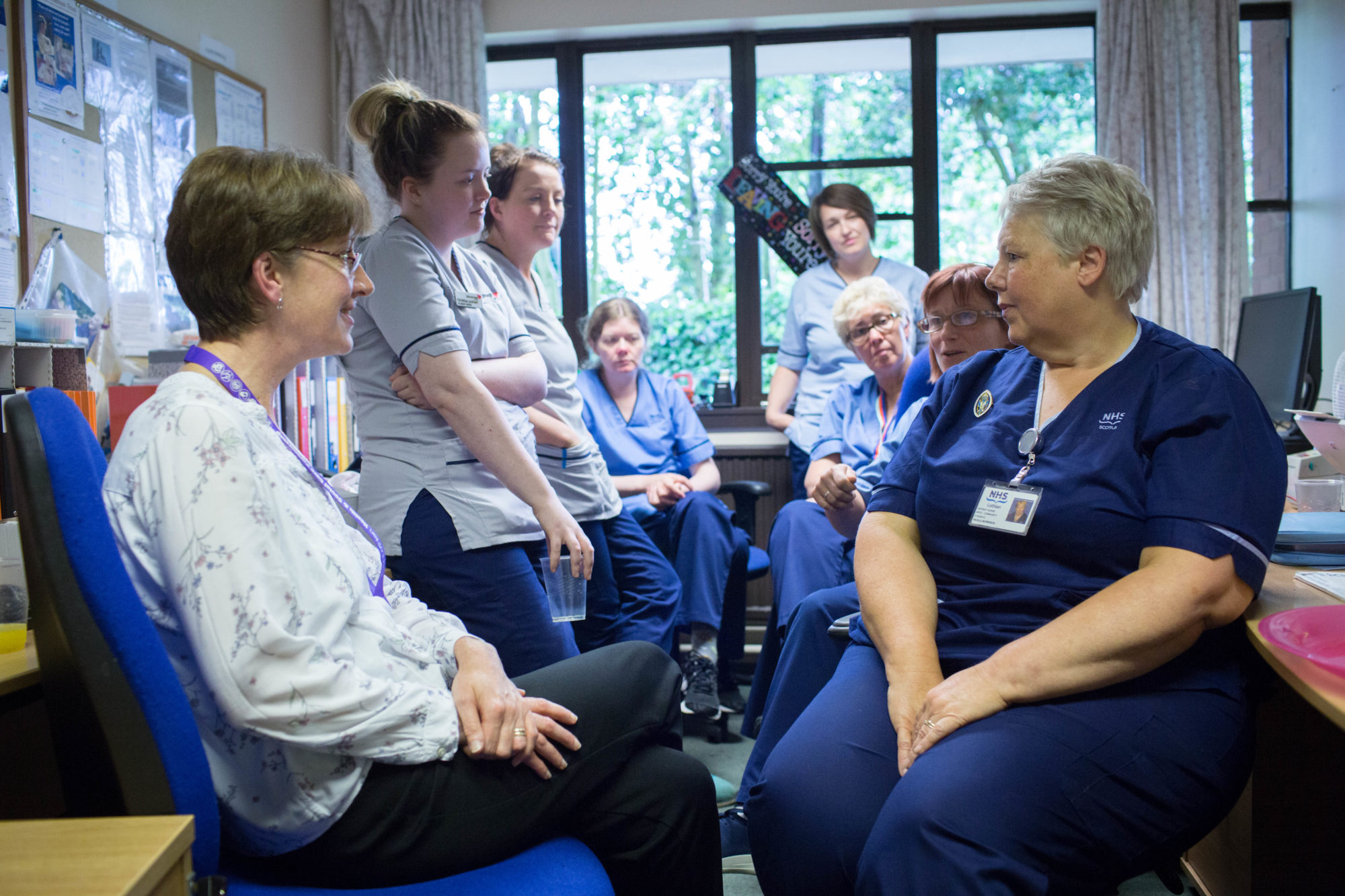 Julie’s vision shifts the focus from constant fire-fighting – doing more of the same, only faster – to promoting self-management and ceding some control. “We need to be enabling people to do what they can to manage their health conditions and improve their quality of life, instead of seeing us as the problem-solvers,” she says. “It’s about helping people to identify what might be holding them back and using that as a lever to drive change. It will be a challenge building these new relationships, but it will be worth it.”

The North Berwick team, which also covers the Aberlady and Gullane areas, comprises one District Nurse, five Staff Nurses and two nursing assistants who together provide care for around 130 people in their own homes. That might mean changing dressings, seeing to the health needs of younger people with multiple sclerosis, providing end-of-life support or, more commonly, dealing with the complications of long-term conditions among older people: Heart disease, diabetes and chronic obstructive pulmonary disease (COPD), which affects the respiratory system, are increasingly prevalent. 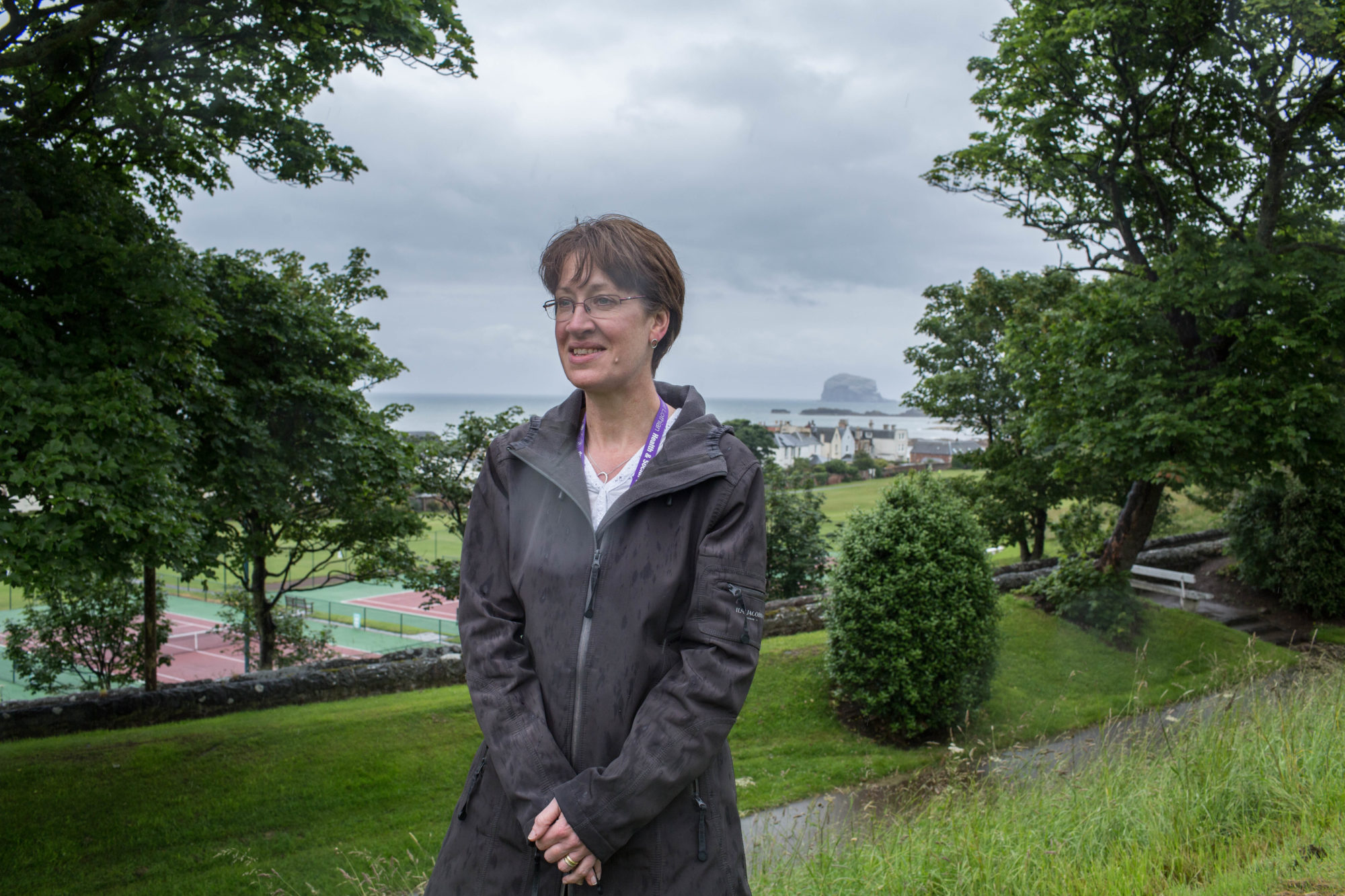 By asking people to identify what matters to them, rather than concentrating on what is wrong with them, Julie believes nurses can do much more to empower people to take control over their health and wellbeing. “I previously visited a lady with COPD who couldn’t find the breath to walk to the kitchen, but wanted nothing more than to get out of the house,” says Julie. “By just sitting with her, listening, and prompting her to identify what was preventing that from happening, she came up with the answers herself. She has stopped smoking and now takes the bus three times a week to visit a sister she hadn’t seen in eight years.”

Having worked as an Advanced Nurse Practitioner caring for people with long-term conditions and as a District Nurse in NHS Lothian, Julie is well aware of the realities for both patients and staff. “It’s about giving the nurses permission to spend an hour with someone if they need it, rather than 10 minutes,” she says. “I am working on how we can go about supporting that.”

Julie’s commitment to community nursing pervades everything she does: she had a hand in adapting the NHS Lothian clinical decision-making model to fit the community setting, and has an honorary lecturer contract with QMU where she is involved in developing and delivering the district nursing course.

“It is important that the community nurses of the future are equipped to respond to changing needs,” she says. “For me, managing change is the most massive challenge there is.”

Julie has recently changed roles, and now works as a Lecturer in Community Nursing at Queen Margaret University.