With health policy shifting to a community based, integrated system, the role of the District Nurse is absolutely central to high quality, person centred care. 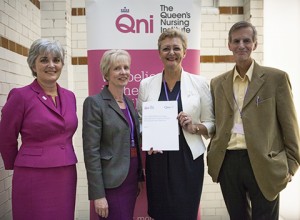 However, the standards which define the specialist practice of a District Nurse were originally developed in 1994 by the UKCC and have not since been updated by the Nursing and Midwifery Council (NMC).

It was felt across the profession that there was a need to modernise standards for District Nurses, and the Queen’s Nursing Institute (QNI) and Queen’s Nursing Institute Scotland (QNIS) led a project to introduce new voluntary standards. These voluntary standards will enhance, not replace, the existing NMC standards, and will support the development of education programmes for contemporary and future practice.

QNI and QNIS established an advisory group made up of experts from each of the UK countries, including senior figures from education, commissioning, third sector, the NMC and the four governments to develop the standards.  Following a consultation over the summer months, the final standards are being launched today.

Mary Saunders was seconded from South Bank University to lead the project and she said: “The process included the observation of District Nurses in practice across the UK, which allowed us to develop these standards based on the wide range of skills they require.”

QNI Chief Executive Crystal Oldman said: “These new QNI/QNIS voluntary standards for District Nurse education and practice clearly place the specialist profession of District Nursing at the centre of community healthcare. It is a testament to the work of the individuals and all the key stakeholder organisations involved that we have been able to create and agree a unified vision for District Nurse practice across the UK.”

Scotland was well represented on the group, with QNIS joined by NHS Education for Scotland and the Scottish Government.  Clare Cable, Chief Executive and Nurse Director of QNIS said:  “As all four countries move towards integrated health and social care, the need to articulate the role of the District Nurse and the generalist specialist skills which they bring is vital.  This is a timely contribution to the conversations we are all having about delivering high quality care at home”

The QNI and QNIS are calling for approved higher education institutions to work with their provider organisations in creating programmes based on these standards.  They have been developed with the active involvement and support of the Association of District Nurse Educators (ADNE). The NMC has confirmed they will note where institutions have mapped future accreditation and validation against the new standards.

The new voluntary standards can be downloaded by clicking here.