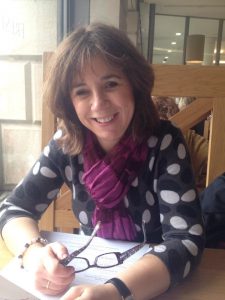 Caroline Dickson, Senior Lecturer in Community Nursing at Queen Margaret University, tells us about her recent trip to the ICCHNR Conference in Seoul to talk about CHOICE, a QNIS funded project looking at integrated working for end of life care.

My first impressions of Seoul were East meets west, old meets new, tradition meets contemporary. Overwhelming, I experienced friendliness and an eagerness of people to engage. After an early start and a long journey across Seoul on a packed but efficient underground train, my colleague Julie Green from Keele University and I arrived at Seoul National University for the first day. We were taken to Dongjak-Gu Public Health Centre where we were treated to an overview of services and a tour of the Health Centre. There are a variety of different health prevention and promotion programmes. The health centre serves a population of 400,000 and also has a role in monitoring pharmacies and hospitals in the locality.

800 delegates attended the ICCHNR conference either in person or online. The theme of the event was health promotion across the lifespan. The atmosphere was buzzing with excitement and it was such a privilege to network with colleagues from 19 countries. There was a particular emphasis on evidence-based community health nursing and this theme is being taken forward by ICCHNR. There is a vision to influence policy makers across the world.

Overarching thoughts
There was a real sense of increasing community health nursing research globally.
Community health nursing is playing an increasing role across the world in avoiding unnecessary hospital admissions.
At the conference there appeared a particular emphasis on participatory research methods and engagement with service users.
There was an eagerness to collaborate in community nursing research.

Presentations
I presented the work I have been leading, funded by the Queens Nursing Institute Scotland: CHOICE which was well received. I also presented on my doctoral research, The meaning of specialisation from the perspectives of district nurses. This too was well received and stimulated some debate.

Key learning overall
The Lundeen model of community health
Community nurses can contribute practice-based evidence to augment gold-standard evidence into practice. We therefore have to find a way of documenting.
Normalisation Process Theory (Carl May) to analyse service-user involvement Community-based participatory research .(Lazarus et al 2012) Touching lives after the storm project in the Philippines.
There are particular faith-based interventions and research methods.
The concept of healthy stewardship parenting
The value of realist methodologies in reviewing the literature.