Ally Lister is a Queen’s Nurse and District Nurse working in Keith and Fochabers. She shares her story of reuniting her 2017 cohort online to create ‘Lean on Me’, a charity cover song to raise funds for QNIS.

Everyone has a voice – this statement comes from the heart of someone blessed by having music and singing in her life for as long as she can remember. 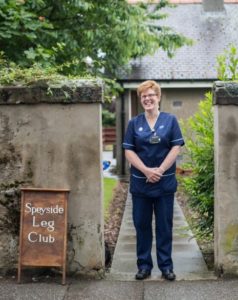 In February 2017, I had the incredible fortune of being selected as one of 20 candidates that would become the first contemporary Queen’s Nurse (QN) cohort in Scotland. The programme opened with a week long residential gathering. Little did we know, staring around a room full of strangers, that the relationships made here would change not only our professional paths but our entire outlook on life.

Throughout the residential, the cohort developed a close bond. The programme facilitators encouraged us to develop our own self-confidence and by the end of the week, we were making plans to keep in touch and boost each other up outside the programme. One idea which came from our discussions was to form a choir. The suggestion to perform together at our award ceremony in December was met with excitement. It was clear the collective project resonated with us that day. Once back in our busy lives, very much outside of the bubble, achieving our ambition became more difficult. Full work schedules, family and other outside distractions prevented us from developing our own musical piece in time for the awards event. Undeterred, however, we took up the invitation to join the choir who were invited to support the event – Scotland’s Farmers and Farmer’s Wives Choir, because one of their members is Kelvin Frew, part of our QN group.

Three years later, we remain inspired by the Queen’s Nurse programme. Throughout this pandemic, which has thrown many life-changing experiences at us, we find ourselves still striving to achieve positive change. Despite new challenges to overcome, we have focussed on the things that mean the most to us. I decided it would be the perfect time to try and revisit our choir idea. Singing is a recognised way of soothing the soul. I thought this would be a great way to support one another, to bring us back together, if only in a ‘virtual way’. 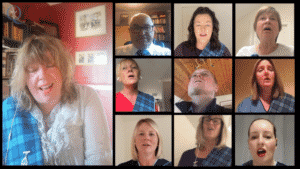 Back in 2017, I had chatted about our choir ambitions with my wonderful friend Hugh Johnstone. Hugh is the Musical Director of Aurora – the choir I sing with in Huntly. Hugh was very supportive of our original idea. I knew if I were revisiting this in 2020 that I would do well to have Hugh on side. When I discussed the possibility of achieving this ‘virtually’ he was not put off, conversely, he was incredibly encouraging and keen to make this happen for us. 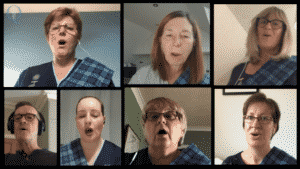 With Hugh by my side, it was time to float the idea to my fellow QNs. Very quickly I felt an incredible warmth and support from them all. I knew we would succeed. Although some were keener than others to get involved in the actual singing, they all fully supported the idea. Collectively, we chose the song ‘Lean on Me’. The lyrics, imbued with care and encouragement, carried meaning for a group of community nurses working through challenging times. For this project to have the depth and meaning we hoped for, it would be foolish not to include those who were our greatest supporters and who were with us at the start of this wonderful journey. Unanimously, we decided to invite the facilitators, Clare, Brendan, and Jane, to join us.

Singing comes naturally to me and I had never appreciated that for some this is not the case. So, the project was not without its hiccups, many people working through the anxiety of singing at all and certainly being recorded as well as being captured on camera. Even though my ambition was to spread some relaxation I was reminded that we all need support to be truly comfortable. The openness and caring nature of the group shone through as we supported one another to have the courage to participate.

The timeframe for completion of this project had several extensions, as people had to prioritise their energy to addressing challenges at work and at home; but the commitment to being involved through these turbulent times demonstrates the power of our collective resilience. I am reminded that with tenacity and trust we can always find ways to achieve our vision. It is with our own commitment that we can bring passion and pleasure to those around us. 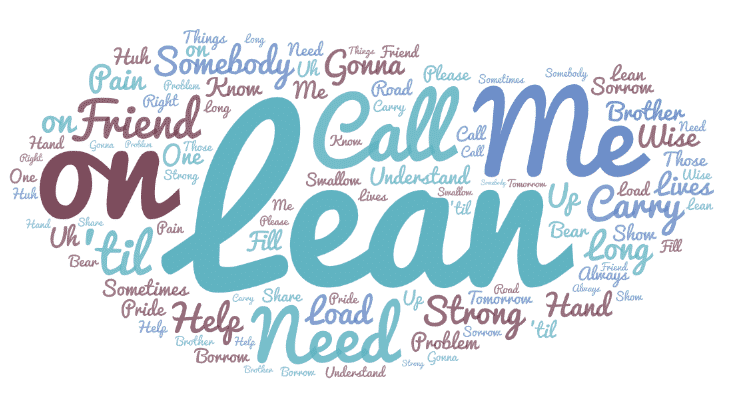 Whilst the co-ordination of the project was not without its hurdles, the reunion and result have made it so worthwhile. I believe we have created a cover version that warms the heart. I invite you, along with our 2017 cohort, to listen to our version of ‘Lean on Me’ and where you can donate to QNIS.