On 28th September, 31 Castle Terrace was open to the public for the first time, as part of Doors Open Day.  Fiona Fitheridge, Welfare and History manager with QNIS, was organiser in chief, and has written a three part blog about the experience.  Part 1 is below: 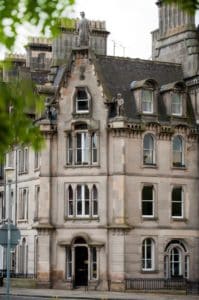 2019 marks 130 years of QNIS. Back in 2018, the QNIS team was brainstorming ways to celebrate our 130th anniversary, and opening our building to the public for the Cockburn Association’s Doors Open event in Edinburgh seemed an obvious thing to do. There was plenty of time to plan ahead and make sure we could do a good job.

QNIS has occupied a Category A listed building on Castle Terrace from its very early days.  Established in 1889 as the Scottish Branch of the Queen Victoria Jubilee Institute for Nurses, it moved to Castle Terrace in 1890. Not only does the Institute have a story to tell, but so does the building.

Hundreds of people walk past the office at 31 Castle Terrace every day. Some are tourists and stop at our doorway to take photos of the Castle, others are commuters on their way to work. Hardly any of them would know anything about the Institute and the work that has gone on mere metres from their commute. Doors Open Day would be a brilliant way of telling them our story.

The first step was to be accepted by the Cockburn Association. They were very supportive and keen for us to take part (so much so that they asked if we would open in 2018!). Our friends at the RCN, who had opened in years gone by, were ready to help and gave us lots of advice based on their experiences. All we had to do was to open our doors and let people in – well not quite!

We have a great space – a boardroom with blank walls – a canvas on which we could create a permanent display to tell our story.  The challenge was going to be how could we tell the story of what we do and the building we occupy and put on a display that would interest and excite people who were curious enough to visit…