The focus of the day is to gather together voices and experiences from across the UK to celebrate, describe and promote Mental Health Nursing. To mark this Mental Health Nurses Day, we asked a number of our friends, Fellows and Queen’s Nurses to write about various aspects around being a mental health nurse. We have three to highlight during the day. Our final piece has been written by Queen’s Nurse Kelvin Frew, and looks at how positive change in mental health nursing can be made with a fair kick o’ the ba’. 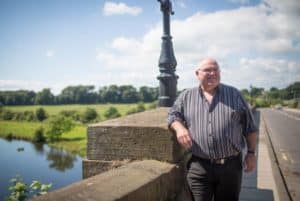 I don’t know whether it’s an age thing or a result of spending more than 30 years working as a mental health nurse in Dumfries and Galloway, but I find my mind wandering back to “days gone by” and reflecting on the many changes that have occurred in mental health care during those 30-odd years in the wee part of Scotland that I have come to call home.

Very recently, I vacated my office in Crichton Hall for the very last time to move to new premises nearby. This was emotional, as for me personally it meant saying goodbye to a building that I worked in all those years ago and, indeed, where the College of Nursing was situated when I began my nursing career. It also signified the end of an era, as Crichton Hall was the original psychiatric unit for Dumfries, opening in 1838, so this grand old building has stopped offering mental health care for the first time in over 180 years.

I remember well the day I came for an interview in Dumfries to see if I was the “right sort” to be offered a place in the Dumfries & Galloway College of Nursing & Midwifery. I had been working for the previous several years in the coal mines of Ayrshire as a mining engineer, had survived (only just) the 1984 national miners’ strike and witnessed the devastation that conflict had on the mining communities of Scotland. It was witnessing the aftermath of that event that had a huge bearing on my decision to become a mental health nurse.

I had very little idea about the role of a psychiatric nurse – we didn’t get called mental health nurses until much later. I had some vague notion about helping people work through their problems so that they could again live productive lives and live successfully in their own communities. I started work in that huge institution where some people had lived for a very long time and it was not what I had envisaged when I set out on my career move.

It took more than one heart-to-heart with a very wise Charge Nurse to persuade me to think longer term and he skilfully used a football analogy, which I thought was pretty cool.

He advised me that I had a serious choice to make, that I could stand at the side of the pitch and shout abuse at the team and the referee, or even quit the game altogether. Neither of these options, he said, would change anything and would certainly not make the “team” play any better. My third option, he advised, was to stop girnin’, be part of the team, get on the field and try and get the occasional kick o’ the ba’. Then I could really start to influence the way the game was going to go, but only if I was willing to put the hard yards in and accept that some of the time we’d be lucky to get a no scoring draw and more often than not, we might lose.

Now, I’m no footballer, but I quite liked that analogy and it certainly had the desired effect.

Fast forward over 30 years. Where is mental health care now?

Well, there is no doubt, there is a long way to go but mental ill health is now recognised as one of the three main challenges we face in healthcare in Scotland. No longer is it something that happens to other people. We now know, even if not everyone yet accepts, that as many of 1 in 3 of us will be affected by mental illness at some point in our lives.

People with mental health issues are, and should be, part of our communities. “They” are not different from us. They are us and we are them. It’s very often some of the issues around the deeper problems in society that, if not cause, then certainly contribute to the challenges that confront them, but that is life and perhaps it’s those all too real issues of loneliness, isolation, poverty and alienation that should be targeted, not the people who pay the heaviest price.

I am very proud to have played a part in the changes in mental health care over the last 30 years; I’m very pleased to still be playing a part, and I’m glad I didn’t throw in the towel all those years ago.

I’ve had what everyone should have – a place in the team and a fair kick o’ the ba’.