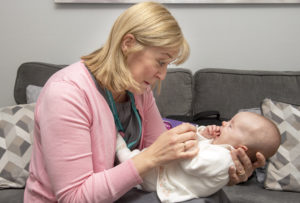 Elizabeth Smith is Breastfeeding Advocacy Lead for Scotland within the Scottish Government, she is also a Queen’s Nurse. In 2017 she was Community Infant Feeding Nurse at NHS Ayrshire and Arran and received QNIS funding through Catalysts for Change. Here, she tells us about her journey through Catalysts. Read more about her project, here.

My role covered a lot of different areas – staff training, policy and guideline development, and the provision of specialist support for the Health Visitor Team for any infant feeding issues. Protecting, promoting and supporting breastfeeding was also a part of my job.

I’d known for a while that I wanted to do some work around spreading awareness of breastfeeding.  North Ayrshire had a really low rate of mums breastfeeding – only 17% of mums breastfed at weeks 6-8, compared to the Scottish average of 26%; there was an embedded culture towards formula feeding, and I wanted to show them that there was another way to feed your baby.  I’d looked around for funding, but awareness-raising of breastfeeding never met the criteria, and then I saw Catalysts for Change, and the project did fit, so we were off the ground.

I wanted to start as early as possible, why wait until people are pregnant and expect the midwife to change attitudes; so we talked to young people, in schools. Interactive session with all age groups led to a relaxed atmosphere for open and honest conversations. We did a whole school approach, speaking to every year group, along with their teachers. We’d told the teachers that they were welcome to leave us to it, but they all stayed. Many later said that they had learned enough that they could be involved in helping to deliver future sessions. 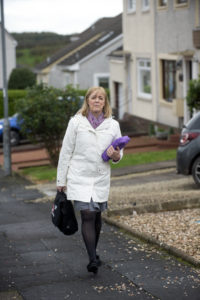 The project allowed us to test and develop sessions for nursery, primary and secondary schools. And the work is now being taken forward as part of a national programme to introduce children and young people to breastfeeding and discuss early nutrition.

Catalysts for Change is a partnership programme, and this truly was a partnership: not just teachers and schools, but, parents, young people, Breastfeeding Network colleagues, we all worked collaboratively, and the project goes on to this day.

The Catalysts for Change Programme provided us with a lot of support throughout, it isn’t just the funding. Meeting up with the other projects, all starting off at the same time was really interesting, to get different ideas, perspectives and feedback on the project. That gives you a boost, reminds you what you are doing, and helps refine the final product.

The funding itself may not be a lot, but a small amount of funding can make a big difference.

We spoke to over 1,000 kids about breastfeeding.  We could not have done that without the funding.  In turn, this has snowballed out into the community.  It started off as a small project, but it has had a big impact.

You can learn more about the Catalyst for Change Programme here.