A retired Queen’s Nurse has been sharing her stories of caring for communities across Edinburgh for almost 40 years in a new podcast.

Christina Thomson, 77, spent decades working as a district nurse in the city until her retirement in 2002.

She has been reflecting on what the role involved when she started in the 1960s as part of a six-part podcast series of 20-minute episodes talking to Scots – and people who’ve moved here – about the real Scotland.

Mrs Thomson told Scots Spill the Beans: “We had a lot of respect from the public as a nurse. We were so recognisable in our uniforms – a lovely Harris Tweed coat, with an assortment of hats over the years.

“We would hold the hat on with hat pins but on a very windy day on Leith Walk it blew off my head and rolled down the street. Three men, I can just see them now, chased down that hat and handed it back saying ‘here you are, sister’ – that was the kind of respect we had.”

After completing her general nurse and midwifery training, Mrs Thomson went to Edinburgh’s Castle Terrace – home of the Queen’s Nursing Institute Scotland (QNIS) – where she trained to become a Queen’s Nurse.

Following successful completion in 1965, she wore her Queen’s badge with pride as she took up her post as a district nurse in the capital. 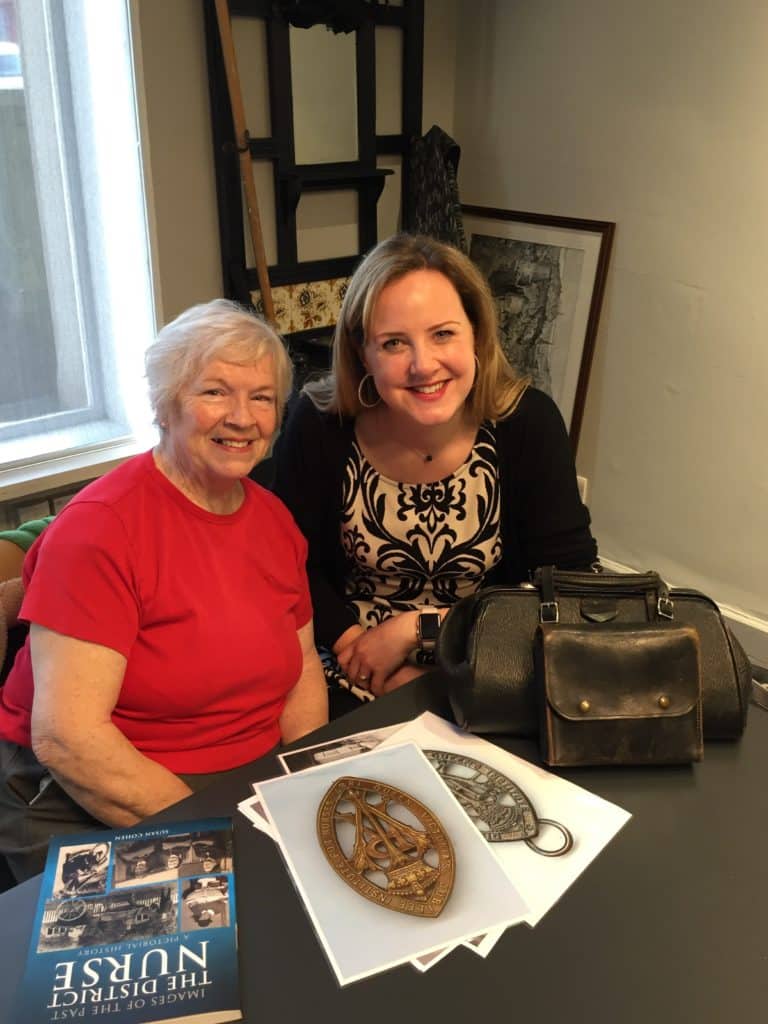 She said: “In those days you weren’t attached to a surgery. You all came in for your work at Castle Terrace as duties were divided out.

“In the 60s, there was only about six cars available to us and they were kept at the Annandale bus garage. We had a lovely chap called Albert who wore his bowler hat, with his wee pipe and glasses. He would say ‘morning nurse’ and the cars would have all their doors open and would be running ready for us.

“We would also be sent out on our rounds on the bus. The buses all had conductors and they loved the nurses. They would say ‘dinnae pay hen, it’s okay, just you sit there and watch for the inspector coming on’. So, you sat there with your knees trembling, watching every bus stop to see if the inspector was going to get on.

“I also travelled by bicycle. I would get the bus out to a garage in Stenhouse, I would leave my bike there under the auspices of this lovely young chap who attended to my bike every morning because it always had a slow puncture. I don’t know why I didn’t have the nerve to ask him to fix it properly.

“I would be cycling up the street to see a patient and all the wee children would be saying ‘nurse, nurse, nurse, your back wheel is going around and round. What have you got in your bag nurse, a wee baby?’. We were definitely a bit of an event for them.”

Mrs Thomson talked about how she worked all over the city during her four decades as a nurse and always felt that people looked out for the nurse.

“Some of the most interesting houses were on the Royal Mile and at the top of Leith Street,” she said.

“They were very high tenements, very dark with no street lighting inside. Most of them had coal fires quite out in the open.

“It was so pitch dark and they didn’t have names or numbers on doors. But it was a real community, with so many people related. I could go in and give granny her insulin but if I wasn’t sure she was getting the right diet I could go and see a neighbor and say ‘could you look in on granny?’ and they would.

“You could knock on any of the doors and ask for help, everyone was friendly, it was a happy, happy time.”

The podcast is available to listen to here https://apple.co/2HwzsE8

This story first appeared in the Edinburgh Evening News.