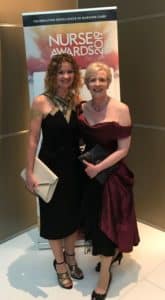 Sarah, a Practice Nurse at the Yellow Practice, Govan Health Centre, won the only award which was voted for by the public, and was the only Scottish winner this year.

In 2017, Sarah was the recipient of a grant and on-going assistance through the QNIS Catalysts for Change Programme, which she used to develop a Men’s Shed in Govan. The Shed opened in September 2018 and continues to be well used by community members. It has become a registered charity in Scotland, attracting support from local businesses, politicians and public bodies.

She was nominated for the award by one of the founding members of the Shed, John Alexander, who said:

“Ms Everett has been the driving force behind our Men’s Shed, which addresses men’s isolation and loneliness and the lack of positive activities for men who no longer have anywhere to go each day.

‘She has been so willing to go the extra mile for men like us, dedicating hours to navigating around red tape with her infectious enthusiasm. She doggedly motivates all involved to keep going even when dealt bitter blows.

‘The Shed has changed lives. People have a reason to get up in the morning.”

The Catalysts for Change Programme recently received funding from The National Lottery Community Fund, and is due to be relaunched over the summer.

“We could not be happier for Sarah. It is testament to her abilities and drive as a community nurse, as well as the successful, close partnership with her community, that Sarah was honoured with this prestigious UK-wide Award.

“Sarah and the Govan Men’s Shed are a shining example of the good that can come from the Catalysts for Change Programme.  We predict that the shed will continue to be a valuable asset within that community.  We also hope it will be an inspiration to other community nurses across Scotland who are keen to prevent, reduce or overcome health inequalities.  The upcoming round of Catalysts for Change will be an opportunity for them to shine, too.”

She is pictured (left) alongside Clare Cable, QNIS Chief Executive and Nurse Director.